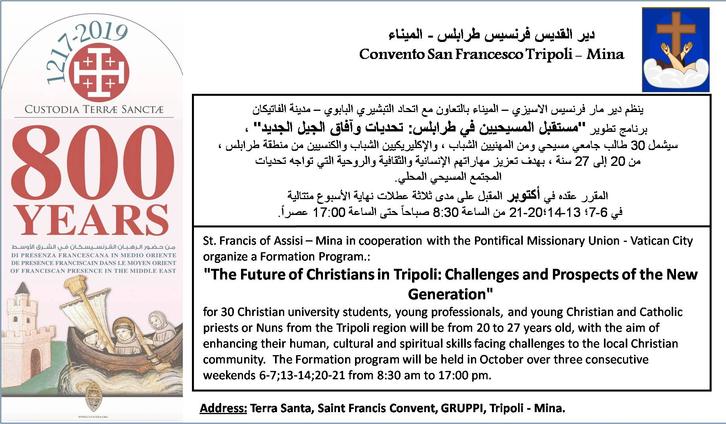 Formation Program "The Future of Christians in Tripoli: Challenges and Prospects for the New Generation" / Pontifical Missionary Union, Vatican City

Thursday 08 October, The students of Moungez village North Lebanon presented their projects about St. Francis of Assisi , his poor life and his love for nature and animals. The presentations included an exposition of paintings about the Canticle of the Creatures painted by Marco Giubileo. Father Quirico Calella OFM spoke to the students and explained them the life of St. Francis, his love for the nature and animals, and his meeting with the Sultan Al Malek Al Ayyoubi in Damietta - Egypt and everything related to him.

November 9 and 11: In the occasion of the Italian Forces
Celebration day and the Marathon of Beirut, a few activities were made together with participants from all Lebanon and Italy (UNIFIL) Italian Forces.

​Saturday & Sunday October 6&7, 2018
The FORMATION PROGRAM
“The Future of Christians in Tripoli: Challenges and Prospects for the New Generation”
Started in Saint Francis Convent with a big participation of Christian students and young Professionist from Tripoli and suburbs.
First day:
Father Quirico Calella OFM Superior of St. Francis Convent and Mr. Emiliano Stornelli,Chairman of RSC Religion and Security Council welcomed the students .
After the welcoming speech, Father Miled Abou diwan “Superior of the Antonine Maronite Order Community in Tripoli” started the lectures with the subject : FAITH, CULTURE, AND SPIRITUALITY. Christians in Lebanon and the Middle East: Faith, Witness, and Mission.
The second Lecture was made by Father Charles KSAS “Responsible for Catechism and Ecumenical Relations, Diocese of Tripoli” with the subject Tripoli: A Theological Place for the Transmission of the Faith.
The third Lecture was madeby Dr. Elias Halabi “Associate Director of the Sheikh Nahyan, University of Balamand” with the subject : Christian Unity in Tripoli: Common Mission and Witness
Second day:
The second day started with Father Antoine Mikhael “General Vicar of the Diocese of Tripoli Associate Professor, Holy Spirit University of Kaslik” with the subject Jesus and the Gospel: The New Ways of the Announcement.
The second Lecture with Ms. Hind MAKHLOUF “Coordinator of the Pastoral Commission for Women, Apostolic Lay Council in Lebanon” with the subject CHRISTIANS IN THE PUBLIC SPACE. The Role of Christian Women in a Multi-Religious Society.
The third Lecture with Dr. Melhem KHALAF Co-Founder and Director of “Farah El Ataa”
Mr. Chafik ABDULRAHMAN Program Manager of “Utopia”
With the subject RECONCILIATION AND PEACE. Building Peace in a Multi-Religious Society.

In the end of each day Father Quirico Calella presented souvenir gifts to all the Lecturers.

Saturday & Sunday October 20 & 21, 2018: Last Weekend of FORMATION PROGRAM “The Future of Christians in Tripoli: Challenges and Prospects for the New Generation” finished the sessions in St Francis Convent Tripoli – Mina

Saturday: The participants organize groups to study their projects where they present problems and solutions to develop, to promote and to highlight a civilized image of Tripoli as center of Peace and dialogue.

Sunday: The Formation Program ended with a special Ceremony: The distribution of the certificates to the participants by the Custos of the Holy Land Most Rev. Father Francesco Patton OFM. That he is in Lebanon for the Canon Visit to the Friars. Where present also: Rev. Fr. Raphael Zgeib National Director, Pontifical Mission Societies in Lebanon , Rev. Father Quirico Calella OFM Director of the Saint Francis Convent, Tripoli-Mina, Lebanon Dr. Emiliano Stornelli Formation Program Coordinator Chairman, RSC Religion & Security Council Mr. Firas WEHBE General Secretary, Apostolic Lay Council in Lebanon. After the Distribution of the Certificates all participated to a Holy Solemn Mass presided by the most Rev. Fr. Francesco Patton OFM with other Concelebrants. Further than the young students a big number of the Philippine Community and other foreigners from Beirut, Tripoli and suburbs where present. In the end of the Mass, before the Benediction of Saint Francis father Custos awarded to the youth the Franciscan TAU. After the Mass as usual all were invited to a buffet-lunch with a special cake with the logo of the 800 years of Franciscan presence in Middle East cutted by the Most Rev.Fr. Francesco Patton OFM.

Saturday & Sunday October 13&14, 2018
The FORMATION PROGRAM continued in the Convent of St Francis - Mina
“The Future of Christians in Tripoli: Challenges and Prospects for the New Generation” with a big participation of Christian students and young Professionists from Tripoli and suburbs.

The second Lecture was made by Dr. Ziad FAHED Associate Professor, Notre Dame University-Louaize with the subject RECONCILIATION AND PEACE.
Interreligious Dialogue and Conflicts Resolution: A Theological and Practical Approach.
The third Lecture was made by Dr.Ziad Fahed with the participation of representitives from 4 different religions and rites Rev. Fr. Ibrahim DOURBALY Parish Priest of the Cathedral of St. George-Tripoli and Rev. Fr. Abboud Gebrayel Maronite Priest, Cheikh Firas Ballout and Cheikh Mohammad Haydar,representatives of Alawite and Sunni.The subject:Extremism,the Role of Religious Leaders.
Forth day:

The forth day started with Prof. Father Najib IBRAHIM OFM Studium Biblicum Franciscanum, Custody of the Holy Land: The Dialogue in the Bible.

In the end of each session Father Quirico Calella ofm presented souvenir gifts to all the Lecturers. 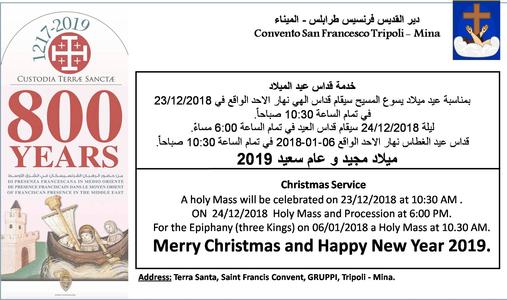