Yesterday 4th February 2019, Saint Francis Convent Tripoli participated for the second time to the Lebanese Pipe Organ week organized by Notre Dame University and Terra Sancta Organ Festival.
This Concert is one of many celebrations to be held for the 800 years from the pilgrimage of Saint Francis to the Middle East in 1219 and the historical meeting with Malek El-Kamel Al-Ayyubi in Damietta Egypt.
By the way from yesterday, after 800 years the Pope Francis is in the Emirates for another historical visit of three days full of meetings with Muslims and Christians.

LORD MAKE ME AN INSTRUMENT OF YOUR PEACE (S.Francis of Assisi).

Roman Perucki (Poland) played on the Organ many tracks from the Baroque period and Farid Rahme (Lebanon) joined him on the Recorder.

A big surprise for our Convent of Saint Francis in Tripoli-Mina and all the Franciscans in Lebanon.
The General Vicar of the Franciscan Order Fr.Julio Cesar Bunader ofm. paid us a visit. He is from Argentina but his parents are from Lebanon. For the first time he visited Lebanon the land of his Ancestors.

Sunday 22 September 2019 a group of young Christians part of the second Formation Program 2019 "The Mission of Young Christians in Tripoli and North Lebanon" went for a trip to South of Lebanon visiting the Unifil " Chama Camp - Italian brigate" and the ITALAIR Contingent.
General Bruno Pisciotta greeted the group warmly and participated with us to the Holy Mass con celebrated by the two Chaplains Father Paolo Solidoro and Father Quirico Calella ofm.
After the Mass all went to have the lunch and then visited the Peace exhibition made by the Christians and Muslims children from the South.
Finally, the group visited on the Green Hill Italair (in Naqoura) including the Hangar of the Helicopters and enjoyed a lot of pictures.

In occasion of 800 years anniversary from the visit of Saint Francis  to the Middle East and his meeting with the Sultan Malek el-Kamel, a PROJECT to promote Human Fraternity will be realized for the habitants of Tripoli & Mina

During three consecutive days from Monday 04 February till Wednesday 06th , St. Francis Convent hosted a group of Marsa organisation for a workshop about "Interactive learning tools for young men and women". 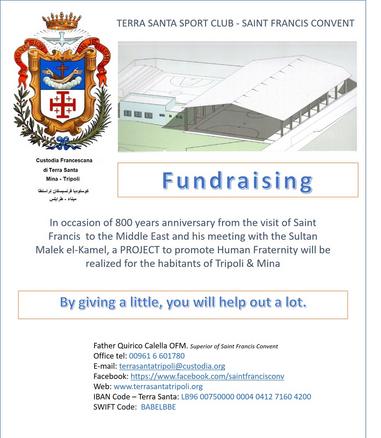 The Director of the St. Francis Convent, Rev. Fr. Quirico Calella OFM, took part in the celebration « STAND UP TOGETHER » to consolidate the civil peace, organized by Farah El Ataa – Offre joie in Bab Al Tabbaneh - Jabal Mohsen, Tripoli, on the afternoon of Saturday, April 13. The event was preceded by a peace march conducted by Lebanese youth from Malloule Square to Baal Darwich. Rev. Fr. Callela OFM joined on the stage a delegation of Christian and Muslim religious leaders, who recited a common prayer before hundreds of inhabitants from the two adjacent Tripoli’s neighborhoods.

In the occasion of the 800th anniversary since the visit of St. Francis of Assisi to the Holy Land, and his meeting with the Sultan al-Malik al-Kamil, and of 50 years since the declaration of San Francisco (CA) and Assisi as Sister Cities, the Custody of the Holy Land, the Archdioceses of San Francisco and the Italian Consulate General in San Francisco, with the cooperation of the local Italian Cultural Institute have presented two pipe organ concerts featuring Mo Cosimo Prontera, Italian internationally famous organist.

The two concerts have been held at the National Shrine of St. Francis of Assisi, in San Francisco, on October 29th, 2019, and at the Holy Cross Parish, in San Jose, on November 2nd, 2019.

San Francisco concert has been hosted by Fr. John De La Riva, OFM Cap, Rector of the National Shrine, who has addressed all distinguished people with his introductory speech; following Fr. De La Riva, Fr. Dr. Quirico Calella, OFM, from the Custody of the Holy Land, has mentioned and emphasized the occasion of the 800th anniversary of St. Francis visit to the Holy Land, which has set the path for many Franciscans to become missionaries in Jesus birth land, along with the 50th anniversary of San Francisco and Assisi relationship as Sister Cities, and the importance of tolerance and reciprocal respect between different cultures and religions, well stated and witnessed by the peaceful meeting between St. Francis and the Sultan al-Malik al-Kamil.

After Fr. Quirico Calella, H.E. Mons. Salvatore Cordileone, Archbishop of Diocese of San Francisco, has addressed the attendance, underlining the importance of cultural events like organ concerts that improve and help people spirituality.

Last speech has been provided by Mr. Lorenzo Ortona, Italian Consul General, who has strongly highlighted the deep Italian heritance of San Francisco, especially of North Beach neighborhood, where the National Shrine is located.

Mrs. Annamaria Di Giorgio, Director of the Italian Cultural Institute, has then given her greetings and presented Mo Prontera bio and the actual concert program.

After that, the magnificent organ of the National Shrine has been masterfully played by Mo Prontera, who executed several pieces, from different authors and historical periods, in order to cover a wide time spread and different cultures.

At the end of the concert, the award ceremony has been held, during which Fr. Quirico has donated several commemorative medals to all the distinguished people attending the concert, along with a very special carved mother pearl tile to H.E. Mons. Cordileone.

The event has been a great success, in terms of attendance, quality of the execution, and commemorative importance.

The Academic session ended with the Certificates Awarding Ceremony presided by the Regional Minister.
At 13.30 took place the concelebrated Mass with Awarding the TAU of Saint Francis of Assisi.

After the Mass all took part to a "Franciscan" lunch.