Sunday 29 April 2018:
Second day 800: For the occasion of the opening of St. Francis of Assisi street a Solemn Mass was con celebrated by Father Quirico Calella ofm, Superior of the Franciscans in Tripoli-Mina and Father Henry Ponce responsible of the Philippines in Lebanon with the presence of:
Mayor of Assisi's Doct. Stefania Proietti and her Assistante Veronica Cavallucci,
Doct.Simona de Martino from Italian Embassy
Mayor of Tripoli- Mina Mr. Abdelkader Alam Eddine,
Representative of Minister of public works Mr. Yousef Fenianos,
Director of Dante Alighieri Doct. Cristina Foti,
and a big group of Philippines.
After Mass small gifts were exchanged between VIP's and then all guests went again to unveil the name of the street and they walked to the garden where was a cocktail prepared for this occasion.
At 1:00 o' clock the Mayor of Tripoli - Mina invited all VIP's for lunch in a known restaurant. 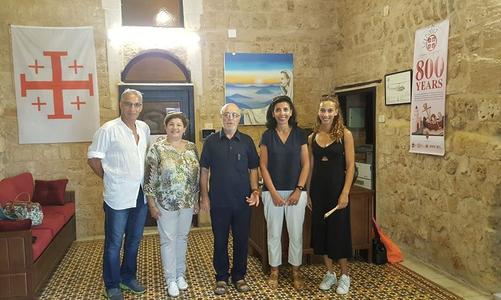 Monday 30 April 2018:
The Second day of Mayor of Assisi Doct. Stefania Proietti and the Municipal Councelor Veronica Cavallucci in Tripoli.
In the morning guided by Father Dr. Quirico Calella OFM they visited first a new Qobbeh public school for boys and girls, assisting to the program “Students mediators”.
After that they went to the old Souk and visited the “Turkish bath", “Khan al Saboun” and other interesting places.
Before leaving Tripoli they paid a visit to the mixed School managed by the Carmelites Fathers.
Finally and after the assistance of two Italian soldiers they flew back to Italy at 5 o'clock PM.

So the visit was concluded. After 800 years the Mayor of Assisi and the Municipal Counselor came back on the same foot steps of the first Franciscans that came in the Middle East in 1217..

​Saint Francis Convent Celebrated his second Event on the occasion of 800 years of Franciscan presence in the Middle East: The official opening of St. Francis of Assisi street in the Presence of:
Mons. Ivan Santus Chargé d'Affaire at the Nuntiature - Papal Embassy in Lebanon,
Doct.Simona De Martino First Councelor of the Italian Embassy,
Col. Massimiliano Sforza Italian Military Attaché,
Mons. Joseph Nafaa Patriarchal Vicar for Zgharta and Bcharré,
His Exc. the Mufty of Tripoli Malek Al Chaar,
Mayor of Mina Tripoli Mr. Abdelkader Alam Eddine,
Brigadier General. Mohammad Fawal representative of Army Staff,
Director of Dante Alighieri Doct. Cristina Foti,
Representatives of Greek Catholic and Greek Orthodox Churches,
Franciscan Friars and other Religious of different Institutions with Sisters.
After the Speeches and a Musical intermezzo presented by Kamil Hanna,Conservatory of Tripoli, small gifts were given to the VIP's from Father Dr. Quirico Calella, then all the Guests went to the plaque to unveil the name of the street and then they walked to the garden where they cut the cake,There was a small cocktail by the way and finally the Mina sky was lit with fireworks 800.
Congratulations....

Friday 29 June 2018 at 19.30 between the Celebrations for 800 years of the Franciscan presence in the Middle East with the collaboration of Dante ALIGHIERI Society, it will be an Organ pipe Concert played by the Italian Maestro Cosimo Prontera. After will follow an open stage program.

​Mayflower -  Festival 2018 in honor of the Holy Virgin Mary at Saint Joseph Church - Achrafiyi with participation of a group of Philippinians from Tripoli on Sunday 20 May 2018, guided by Father Quirico Calella ofm.
The celebration began with the Rosary in the Courtyard followed by a Procession to the Church where was concelebrated a Mass presided by the Latin Bishop Cesar Assayan. After the Mass a parade of different Queens elected by their groups from different countries took place from the Church to the courtyard. Finaly everyone took part to the lunch followed by a show of traditional dances.

Dear friends, Dear friends,
like every year at the beginning of August the great Franciscan family, together with thousands of pilgrims from all over the world, eager to cross the "door of eternal life", are preparing to celebrate the Solemnity of the Forgiveness of Assisi.
From 12.00 am on the first of August until midnight on 2nd August, the plenary indulgence granted to all pilgrims who go to the Porziuncola of the Church of Santa Maria di Assisi on any day of the year will be extended to all the scattered Franciscan and parish churches in the world.
It was in this small portion of the earth (hence Porziuncola) that the poor man of Assisi asked the Lord "that all those who, repentant and confessed, will come to visit this church, obtain ample and generous forgiveness, with a complete remission of all the faults ".
This is why, in addition to informing you of the integral program of events that will surround the celebrations, we wish to offer you a selection of our Franciscan texts, useful tools to get prepared for this important event of the Christian faith.

Thank you for your attention, Happy Feast of Forgiveness!

Welcome to the new French cultural Attache' for the north of Lebanon Madame Yamina Nedjadi and her family.
Madame Nedjadi replaced Mr.Marco Fenoli that was our guest for approximately four years.

Sunday the 4th of February, Saint Francis Convent made the first official Event to celebrate the 800 years of the Franciscan presence in the Middle East. A Mass followed by an Organ with Clavicembalo Concert took place in Saint Francis Church. This Concert was the conclusion of the 3rd Lebanese Pipe Organ Week in Lebanon.  It was played by the Maestro Cosimo Prontera from Brindisi, Italy, accompanied by Mrs. Céline Hjeily and Mr. Fadi Jbaily sponsored by Dr. Edoardo Crisafulli the Director of Cultural Institute of the Italian Embassy. Were present Fr. Khalil Rahme the Director of the Lebanese Pipe Organ Week and Brother Riccardo Ceriani the Co-Director in Lebanon and Superintendent of the Terra Sancta International Organ Festival. Many Friends came from far away like the Franciscan Sisters from Adonis and the Friars from Harissa but the majority were the Philippines. For this reason, Mrs. Jennifer Pasqual, the organist of Saint Patrick Cathedral in New York, originally from Philippine played a special piece out of the program. From Tripoli were present also Mrs. Cristina Foti Director of LA DANTE ALIGHIERI and Mr. Marc Fenoli Director of French Cultural Institute in the North.

This was also the official Inauguration of the new Pipe Organ built by the Italian factory Saverio Tamburini.

An exhibition of the Italian painter Marco Giubilei about the Canticle of the Creatures of Saint Francis of Assisi took place at the Church entrance.