19 December 2018, the first Christmas Concert in Tripoli-Mina took place in Saint Francis Convent Church, Mina.
The Choir from NDU - Louizi was directed by the Maestro Father Khalil Rahmeh.
The Program included Carols and songs in different languages from all over the world.
The last song was "We wish you a Merry Christmas and Happy New Year".
The audience came from Tripoli- Mina, suburbs and also from Harissa and Adonis.

With the Filipino's is already Christmas!
The Filipinos community in Tripoli celebrated the Christmas at St. Francis Convent.
One of them placed the Infant Jesus in the Manger.
The Conclusion of the celebration was made in the hall by cutting the Pandoro (Italian traditional Christmas cake).
Merry Christmas and Happy New Year!!!!

Saint Nicholas of Myra (15 March 270 – 6 December 343),also known as Nicholas of Bari, was an early Christian bishop of the ancient Greek city of Myra in Asia Minor during the time of the Roman Empire. He is revered by many Christians as a saint. Because of the many miracles attributed to his intercession, he is also known as Nicholas the Wonderworker. Saint Nicholas is the patron saint of sailors, merchants, archers, repentant thieves, children, brewers, pawnbrokers, and students in various cities and countries around Europe. His reputation evolved among the faithful, as was common for early Christian saints, and his legendary habit of secret gift-giving gave rise to the traditional model of Santa Claus ("Saint Nick") through Sinterklaas.

Very little is known about the historical Saint Nicholas. The earliest accounts of his life were written centuries after his death and contain many legendary elaborations. He is said to have been born in Patara, Lycia in Asia Minor to wealthy Christian parents. In one of the earliest attested and most famous incidents from his life, he is said to have rescued three girls from being forced into prostitution by dropping a sack of gold coins through the window of their house each night for three nights so their father could pay a dowry for each of them. Other early stories tell of him calming a storm at sea, saving three innocent soldiers from wrongful execution, and chopping down a tree possessed by a demon. In his youth, he is said to have made a pilgrimage to Egypt and the Palestine area. Shortly after his return, he became Bishop of Myra. He was later cast into prison during the persecution of Diocletian, but was released after the accession of Constantine. An early list makes him an attendee at the First Council of Nicaea in 325, but he is never mentioned in any writings by people who were actually at the council. Late, unsubstantiated legends claim that he was temporarily defrocked and imprisoned during the Council for slapping the heretic Arius. Another famous late legend tells how he resurrected three children who had been murdered and pickled in brine by a butcher planning to sell them as pork during a famine.

Less than 200 years after Nicholas's death, the St. Nicholas Church was built in Myra under the orders of Theodosius II over the site of the church where he had served as bishop and Nicholas's remains were moved to a sarcophagus in that church. In 1087, after the Byzantine Empire temporarily lost control of the region to the Seljuk Turks, a group of merchants from the Italian city of Bari removed the major bones of Nicholas's skeleton from his sarcophagus without authorization and brought them to their hometown, where they are now enshrined in the Basilica di San Nicola. The remaining bone fragments from the sarcophagus were later removed by Venetian sailors and taken to Venice during the First Crusade. His relics in Bari are said to exude a miraculous watery substance known as "manna" or "myrrh", which some members of the faithful regard as possessing supernatural powers.

Happy Feast for the Immaculate Conception of the blessed virgin Mary.

O most Holy Virgin, immaculate in body
and spirit, look kindly on me as I implore
your powerful intercession.

O most Holy Mother, receive my prayers
as I present them to God.

O Mary, Mother of Jesus and our Mother,
you intercede for us with your Son.

O Mary conceived without sin,
pray for us who have recourse to thee. 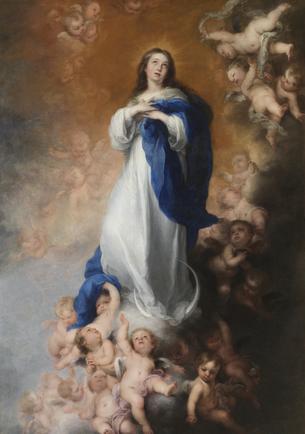 Saint Ludvic (Louis IX) King of France (1215-1270) Patron of the Franciscan third Order.
Born in 1215, Lous IX at 15 years of age, became King. Educated as a Christian King by his saintly mother, Saint Louis undertook two Crusades to the Holy Land.
In Lebanon until today there is a Castle on his name on the sea in front of Saida.
He died at Tunis in 1270

O God,who brought Saint Louis
from the cares of earthly rule
to the glory of a heavenly realm,
grant, we pray, through his intercession,
that, by fulfilling our duties on earth,
we may seek out your eternal Kingdom.
Through our Lord Jesus Christ, your Son,
who lives and reigns with you in the unity of the Holy Spirit,
one God, for ever and ever. AMEN.

​Thursday, October 4th  St. Francis Convent - Mina celebrated the day of its Patron Saint, the Founder of the Franciscan Order, St. Francis of Assisi with a Solemn Holy Mass presided by Father Toufic Abou Merhi OFM with a participation of Franciscan Friars and sisters and believers from Tripoli-Mina, Beyrouth and Adonis.
After Mass and the cocktail all friars and sisters went to a dinner celebrating the occasion
Our Holy Father St. Francis of Assisi lived in Italy during the late 12th and beginning of13th centuries (1182-1226). He is remembered for his poverty, generosity to the poor’s and for his love to the animals and nature. St Francis died at Portiuncula Santa Maria deli Angela, Assisi, Italy on October 4, 1226.
Pope Gregory IX declared St Francis a Saint in 1228.

Let us refer all good to the Lord God Almighty and most high, acknowledge that every good is his, and thank him, "from whom all good comes, for everything. May he, the Almighty and Most high, the only true God, Have, be given, and receive
All Honor and respect,
All praise and blessing,
All thanks and glory,
to whom all good belongs,
he who alone is good. 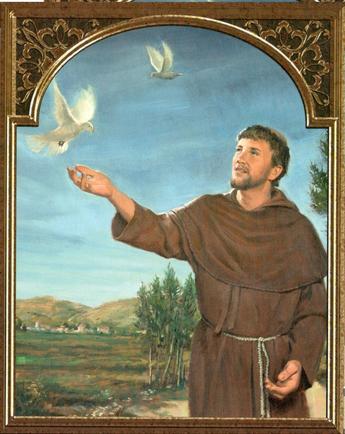 On Monday 24, St. Francis' Convent celebrated the Christmas mass with a number of believers from Tripoli and the suburbs.
One of the children placed the Infant Jesus in the Manger and after the sisters, the friars and the believers went to cut the Penatone
“Christmas traditional Italian cake” to celebrate this occasion.
Merry Christmas to all !!!

Sunday 30 of September 2018 a group of Syrian refugees visited our Convent in Tripoli and spent all the day doing many activities.
First of all a little speech given by Fr. Quirico Calella the Superior of our Convent then all the group went to play Football and BasketBall in the courtyard.
After that a Mass presided by the Franciscan father’s
Fr. Samhar Isaac and Fr. Jihad Krayem OFM.
At the end of the day all the group accompanied by their guides made a promenade to the Corniche in Mina and the Cow's (Baqar) Island. 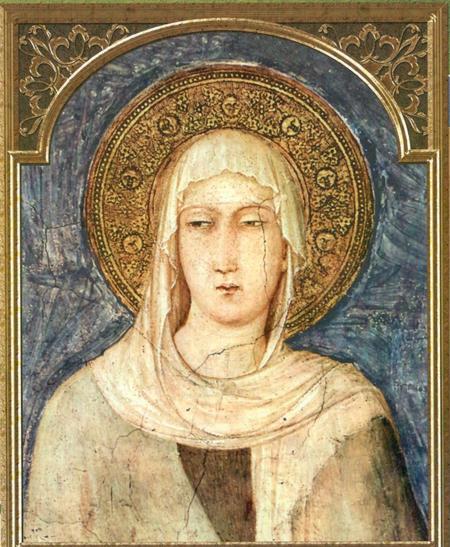 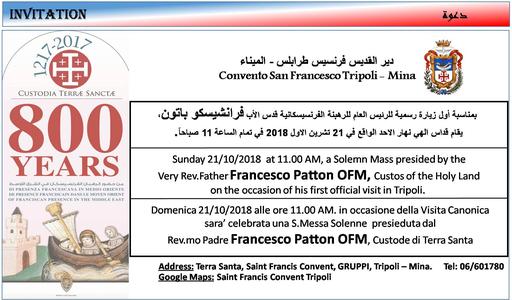 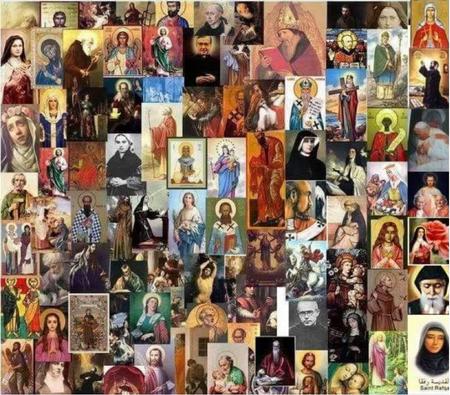 Monday 17 September, Feast of the Stigmata of St. Francis of Assisi.
The Holy Mass on this occasion, presided by Father Rashid Mistrih (Regional Minister) and a participation of several Franciscan Fathers in St. Francis Convent - Mina.
His Holiness Pope Benedict XII allowed the Franciscan Order to celebrate annually the Stigmata of the Lord in the body of St. Francis
The wounds were applied to the body of St. Francis when he and one of his brothers went up to a mountain called Laverna in Tuscania region –Italy, where he wanted to spend some time contemplating prayer and worship at the Holy Cross Feast and after forty days of fasting on the same mountain. When he prayed a Person appeared from a light had six glittering wings, the Sarovem had two high wings above his head, two flying wings and two wings covered his full body.
Francis lowered his face to the ground and bowed reverently. When he opened his eyes, he saw the traces of the nails in his hands and feet, and was hurting him, Francis was rolling with pain so he could not stand on his feet.
St. Francis spent many hours contemplating the sufferings of the Lord Jesus and his wounds; His intense desire was to test the intensity of those pains. St. Francis carried these surgeries until his death, even though he was suffering from the intensity of his pain, and he rejoiced in his soul.

The Italian Poet Dante Alighieri wrote in 1300 the Divina Commedia"Paradise 11":
In the raw stone between Tevere and Arno
From Christ he took the last seal
That his members carried for two years

On Sunday, January 6, 2019, St. Francis Convent celebrated the Feast of Epiphany(that means Manifestation) and the arrival of the Magi (three Kings), giving gifts to the Infant Jesus.
The three kings presented three types of symbolic gifts:
gold, which indicates that Jesus Christ is the king, frankincense, which indicates that he is God and myrrh indicates that he is also a man.
This celebration was made for the Filipino community from Tripol-Mina,Beirut and for the local Christian community.
After the Mass the Filipino community named seven officers to care about the pastoral needs of the community.
After the Ceremony, all went to the guests hall and played Tombola and took the gifts.

A Solemn Mass presided by the Very Rev.Father Francesco Patton OFM, Custos of the Holy Landon the occasion of his first official visit in Tripoli

What you hold, may you always hold.
What you do, may you always do and never abandon. But with swift pace, light step, and unswerving feet, so that even your steps stir up no dust, go forward securely, joyfully and swiftly, on the path of prudent happiness, believing nothing, agreeing with nothing which would dissuade you from this resolution or which would place a stumbling block for you on the way, so that you may offer your vows to the Most High in the pursuit of the perfection to which the Spirit of the Lord has called you.